Another week of record heat in the U.S. has once again been matched by blistering all-time-highs in broader averages. But if you think it’s too late to make a solid purchase with strong odds for success, it’s time to give the following three market heavyweights and some of the today’s most-shorted stocks a look.

It’s proven another hot week for the broader market and a rally led by the tech-heavy Nasdaq. Entering Friday, the major average was up 2% and set for a seventh-straight week of gains and fresh all-time-highs buoyed by outsized strength from market heavyweights Microsoft (NASDAQ:MSFT) and Nvidia (NASDAQ:NVDA).

Seven straight weeks and fresh record highs. That’s persistence. It’s also enough to give pause and look at the friendly and tenacious trend as price action increasingly in need of a rest. What might that look like? Some profit-taking at a minimum or even a modest correction of 3% to perhaps up to 10% could be nearby.

But in a bull market made up of stocks and one we’re unwilling to declare dead, that’s not to say there aren’t other stocks to buy right now. Rotations happen all the time. And mind you, CNBC’s James Cramer stresses, “there’s always a bull market somewhere.” And today it’s easy to see why in three market heavyweights, which also happen to be some of today’s most-shorted stocks staging breakouts. 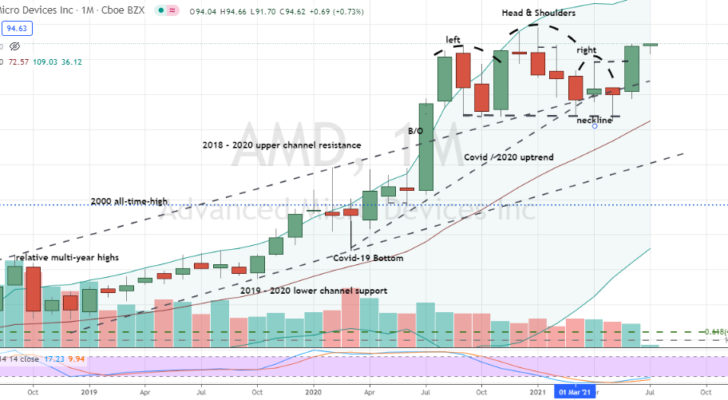 The first of our heavyweight, most-shorted stocks to buy are shares of Advanced Micro Devices. Today AMD stock has about 7% of its shares sold short. That may not sound like much compared to Clover Health Investments (NASDAQ:CLOV) or Workhorse Group (NASDAQ:WKHS). Those are some of the market’s most well-shorted stocks with short interest upward of 35%.

But AMD’s bear population is significant in other ways.

AMD’s shorts do represent a hefty $7 billion in bearish bets against a former turnaround story. Today of course, AMD is a top-flight semiconductor stock and obviously a most-shorted stock by market cap. And right now this heavyweight is breaking out!

Technically, the monthly view reveals a bearish head-and-shoulders pattern failure. In closing out June, AMD stock rallied above the high of the formation’s right shoulder. Broken patterns can provide great opportunities to bet on a new trend. And the large size of this failure, coupled with a bullish stochastics crossover in oversold territory, offers the potential for a powerful rally to new all-time-highs to unfold.

One favored way to protect and serve investors trading accounts in this most-shorted stock is to buy the December $92.50/$110 bull call spread in lieu of AMD shares. 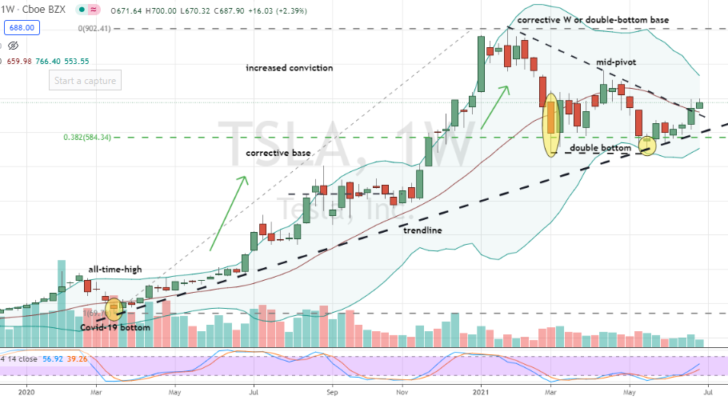 Tesla is the next of our heavyweight, most-shorted stocks to buy. In the past and not unlike WKHS or CLOV stock, TSLA shares maintained the largest short interest by percentage. Today there’s still plenty of bets against the EV giant.

As with AMD, though, you have to look at the dollar-value of shares bearishly-wagered. Right now this most-shorted stock is at the top of that list with nearly $24 billion betting against Tesla. More importantly, those shorts can assist with a fairly important breakout.

Technically, this most-shorted stock has rallied marginally through angular resistance within TSLA’s corrective double-bottom base. Some might see today’s stock price in no-man’s land. You’re not buying the pattern bottom, nor are you purchasing a classic mid-pivot breakout. But given the angular clearance and bullish-trending stochastics, I’m a fan of this slightly under-the-radar breakout.

The December $750/$900 call vertical is where I’d suggest parking capital for electrifying return potential, while avoiding significant damage in the event of an unwanted U-turn on the price chart. 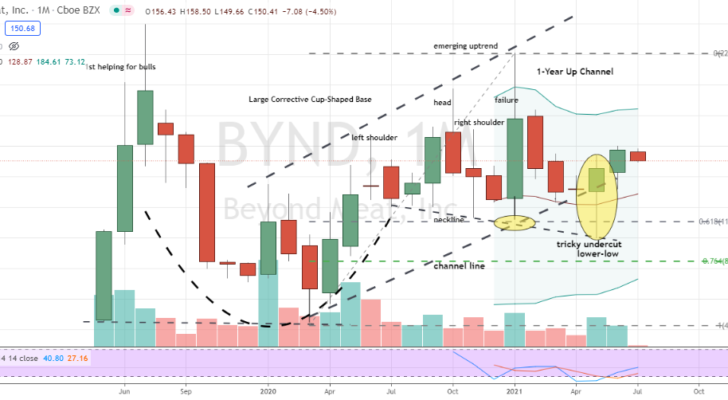 The last of our heavyweight, most-shorted stocks to buy is Beyond Meat. This one is a true heavyweight in a couple ways. From grocery stores to fast-food chains such as McDonalds (NYSE:MCD) and Yum Brands’ (NYSE:YUM) Taco Bell, these days the company’s meatless alternatives are everywhere.

As well, with 19% of its float sold short, a large bear population is trying to take a sizable bite out of BYND stock’s rounding error, large-cap $9.83 billion valuation. And right now that looks like a large mistake by shorts and an opportunity for bulls as shares break out of a key bottoming pattern.

Technically, BYND shares are stationed near the high of a bullish hammer candlestick formed in May. The volatile bottoming candle undercut classic uptrend channel support before successfully testing a former neckline and Fibonacci zone and reversing smartly higher.

With this most-shorted stock back inside the uptrend channel and backed by a well-positioned monthly stochastics, BYND looks set to rally within the channel with lots of space to move before resistance enters the picture. To that end, I’d put an August $160/$185 collar on this bull to enjoy some sizzling upside with less fear of getting burned.

On the date of publication, Chris Tyler holds (either directly or indirectly) positions in Advanced Micro Devices (AMD), Beyond Meat (BYND) and their derivatives. The opinions expressed in this article are those of the writer, subject to the InvestorPlace.com Publishing Guidelines.