After besting every other sector in the first half of 2021, energy stocks are finally receiving their comeuppance. I can think of many reasons for the reversal of fortune. We’ll outline a few below and then share three energy stocks to sell before the damage worsens.

The first reason for the fallout is the overall migration we’ve seen out of value stocks. With interest rates reversing lower, traders have been running back into growth stocks at the expense of not just energy but basic materials and financials as well. Crude oil prices aren’t helping either. After zipping higher for the past 10 months, black gold has finally encountered stiff resistance near $75. A double top is forming, and prices threaten a support break for the first time in a while.

While I don’t think the oil correction will persist that long, it will act as a headwind for energy equities while it’s here. So I scanned the sector for stocks that are showing relative weakness. Here are three of the worst:

Consider them all top tickers to sell. Let’s take a closer look at each chart. 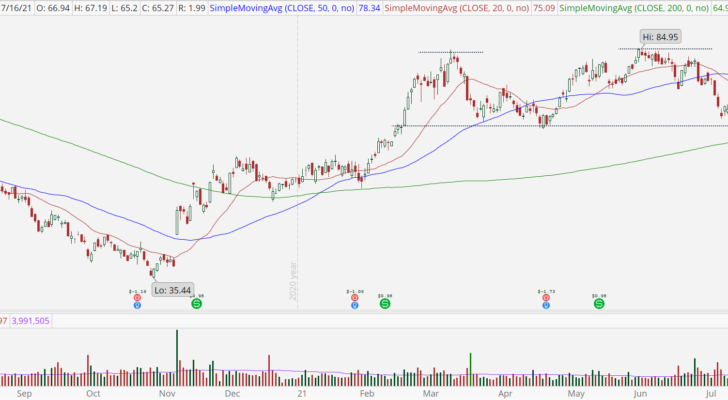 Traders tend to favor strength while shunning weakness. And when it comes to the most popular players in the energy sector, none looks worse than Valero. The oil refiner has now tumbled 23% from its peak seen in June and is quickly closing in on the 200-day moving average. Even worse, the drop completed the right side of a massive multi-month double top that could spell trouble for prices moving forward.

Not surprisingly, distribution days are multiplying this month, and signal institutions are heading for the exits.

The weekly time frame does offer some reason for hope. The rising 50-week moving average and a major old resistance zone come into play at $63. Thus far, however, buyers have yet to swoop in. If you think prices can push toward $60, then consider entering the following spread. 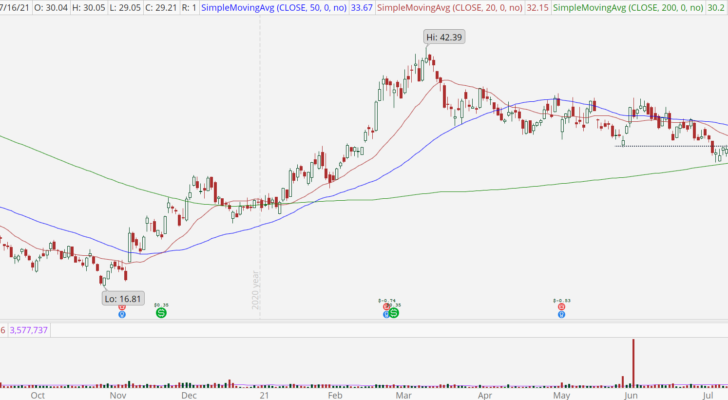 The unwind in HollyFrontier’s once-powerful uptrend moved steadily at first but has since accelerated. Unfortunately, July hasn’t been kind to the petroleum refiner. With its rollover, the RSI is plunging to new lows, and downside momentum is gaining steam. Worse yet, we just sliced below the 200-day moving average generating a sell signal.

After analyzing HFC stock from every angle, the most bullish thing I can say is it’s getting quite oversold. But that’s hardly a reason for optimism.

The next earnings report is slated for the beginning of August, and I wouldn’t be surprised if prices continue plumbing the depths until then. 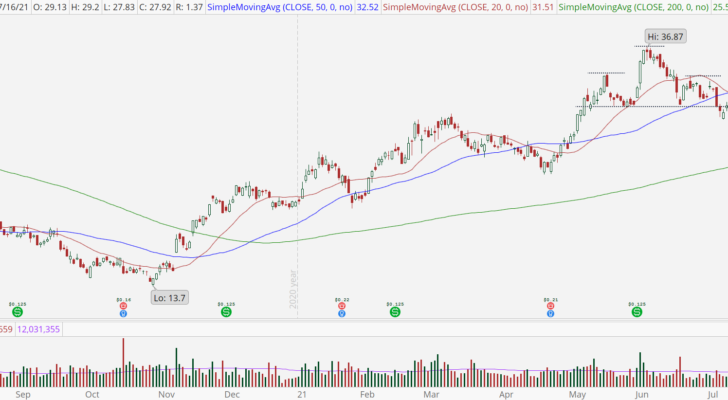 Schlumberger rounds out our trio of energy stocks to sell, and it shares its predecessors’ ugliness. A head-and-shoulders pattern has formed. Last week’s neckline break brought sellers to the yard, and they’ve been pulling prices lower ever since.

Prices are down for the fourth day in a row and look hell-bent on revisiting the 200-day moving average at $25.50. With that level still some 10% away, there’s ample opportunity for new short plays here.

On the date of publication, Tyler Craig did not have (either directly or indirectly) any positions in the securities mentioned in this article. The opinions expressed in this article are those of the writer, subject to the InvestorPlace.com Publishing Guidelines.

For a free trial to the best trading community on the planet and Tyler’s current home, click here!

The post 3 Energy Stocks to Sell as Oil Slumps appeared first on InvestorPlace.