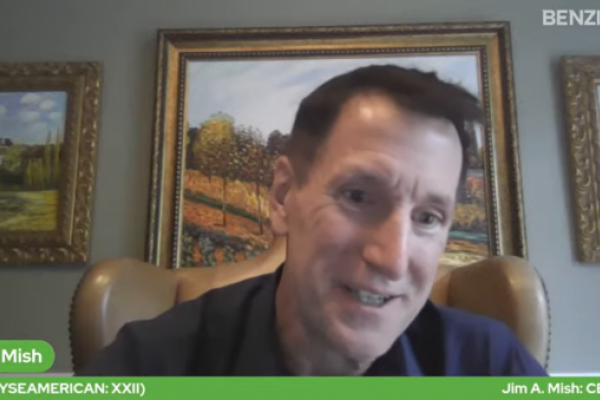 “At our core, think of us as the Intel Inside of cannabis. We’re a disruptive plant-based biotechnology company,” said CEO Jim Mish, presenting at the virtual Benzinga Cannabis Capital Conference on Thursday.

22nd Century was founded on a mission to bring forward a product able to reduce the harm caused by nicotine-based cigarettes, and later expanded to other plant lines including marijuana, hemp, and a third –still undisclosed– alkaloid-based plant.

The Tobacco Franchise: 22nd Century has developed a low nicotine strain of tobacco, which is aimed as a harm reduction alternative to the cigarette market.

“We have a very deep moat around our IP, certainly within the tobacco franchise. We own the IP on the low nicotine variant and we’ve got additional strains that we’re growing as we speak.”

The company’s VLN low nicotine brand has received FDA authorization to launch commercialization but the company still awaits an allowance to claim the product’s 95% reduced nicotine profile on the label.

“I’m absolutely confident we’re in the final stage of that, and once we get that we’re prepared to launch that product within 90 days,” Mish said.

The approval of a “nicotine mandate” that would require all low-level nicotine cigarettes to divulge nicotine contents on their label, could be a game-changer for the company’s marketing efforts.

“All of the clinical data that has been run by groups like FDA and NIH point to the success factors of reduced harm by the reduced exposure to nicotine. Our own consumer studies show a very strong uptake in this product line,” Mish added.

Cannabis and Hemp IP: “One of the solutions that we’re trying to bring forward –to what we believe is a problem within the entire industry as it expands and grows– is the ability to optimize the plant at the genetic level, but through non-GMO-based methodology,” Mish explained.

The executive believes that this cannabis property is the keystone in the next generation of biosynthetic cannabinoids, offering the possibility of modulating levels of specific cannabinoids, terpenes and flavonoids, while optimizing yield.

“Imagine being able to produce artisanal-type marijuana or hemp-cannabis, but at the largest scale required as the markets expand in the U.S., Canada and offshore.”

Mish added that the company boasts a valuable network of strategic partnerships to bring disruptive plant strains from concept to commercialization within two years, including a partnership with Aurora Cannabis (NASDAQ: ACB) on its biosynthetic IP.

“We stay on the ingredients side and seek strategic partnerships with those who are selling formulated products,” he commented.

The CEO says that his company already has secured IP and is lining up strategic partnerships for a third line of business focused on an alkaloid-based plant which has not yet been officially announced.

Mish said 22nd Century expects the first revenue and profit streams to come in the second half of this year, from licensing revenue on their original IP.