The markets finished last week on a low note, after a month of gains. It’s the same pattern we’ve been seeing all year, just writ small – volatility, with swings up and down, especially in the tech sector. But the overall trend has been up. Year-to-date, the tech-heavy NASDAQ has gained 12%, and the S&P 500 has gained more than 15%. The common wisdom is, we’ll continue to see gains, if not on the same scale as pre-COVID.

Wall Street’s analysts have been busy, looking for the best investment choices for the current environment. And what better stock to choose than one that has just been upgraded? In the past week, analysts from investment firms JPMorgan and Needham have picked two technology stocks for just that – not just further gains in a generally rising market, but for a turnaround. They’ve upgraded these stocks from Neutral to Buy, and that means investors should take notice.

We’ve used the TipRanks platform to look up their current performance, and found that these are Strong Buy equities, with double-digit upside potential. In short, the consensus has shifted and they’re looking better to the Street – which means investors should take notice. Here are the details.

We’ll start with a Boston-based company in the insurance sector, which may not seem a likely home for a tech innovator, but Duck Creek has made it so. Duck Creek is a software company, making industry-specific, cloud-based insurance management platforms available to major insurance carriers. Duck Creek’s customers include such big names as Geico, AIG, and Liberty Mutual – but also smaller providers like Cumberland Mutual, Concord, and Pearl. The company’s software packages make it easy for insurers to manage the routine tasks of the industry – and they are scalable.

DCT went public last August, so the stock has been on the NASDAQ for only a little less than one year. The IPO was a successful event, raising $405 million, and the shares rose from $27 to $40 each in their first day’s trading. The stock peaked just below $60 in February. Since then, the shares hit a trough in mid-May, and have risen from their $35 low back to $43. Duck Creek now boasts a market cap of $5.7 billion.

Duck Creek Technologies has seen revenues rise over the past year, since going public. The top line was reported at $58.3 million in October, and now stands at 67.9 million for the most recently reported quarter (Q3 of fiscal 2021, ending March 31). The gains were driven by increased subscription revenue, which the company reports as up 56% year-over-year, and SaaS annual recurring revenue, which grew 64% yoy. In earnings, the company reported a GAAP measure of $0.00 per share – break-even – for the quarter. While not positive, this was better than the net losses reported in the three previous quarters.

JPM analyst Jackson Ader is impressed by the company’s early lead in the cloud software niche for the insurance industry, writing, “When it comes to cloud adoption, we see two areas that customers prioritize and they are ease of implementation and configurability, both of which Duck Creek prioritized as it built its cloud platform. In our opinion, the decision to use a public cloud infrastructure (Microsoft Azure) was an important one as the open platform supports easy scalability.”

Ader adds of DCT’s prospects, “Duck Creek is leading the growth race at the moment driven by its SaaS ARR growth of 74.7% in 2Q21. Cloud revenue is still small at $30.6M and 49% of total revenue, but the hypergrowth for its SaaS business is enough to lift the overall growth rate of the company up above 18%…”

In line with these comments, Ader upgrades the JPM stance on DCT from Neutral (i.e., Hold) to Overweight (i.e., a Buy), and his $62 price target implies a 44% one-year upside for the shares. (To watch Ader’s track record, click here.)

Duck Creek’s stock is currently selling for $43.10, and its $51.67 average price target suggests it has room for an upside of 20% in the next 12 months. The stock has received 9 recent analyst reviews, including 8 Buys and 1 Hold, for a Strong Buy analyst consensus. (See Duck Creek’s stock analysis at TipRanks.) 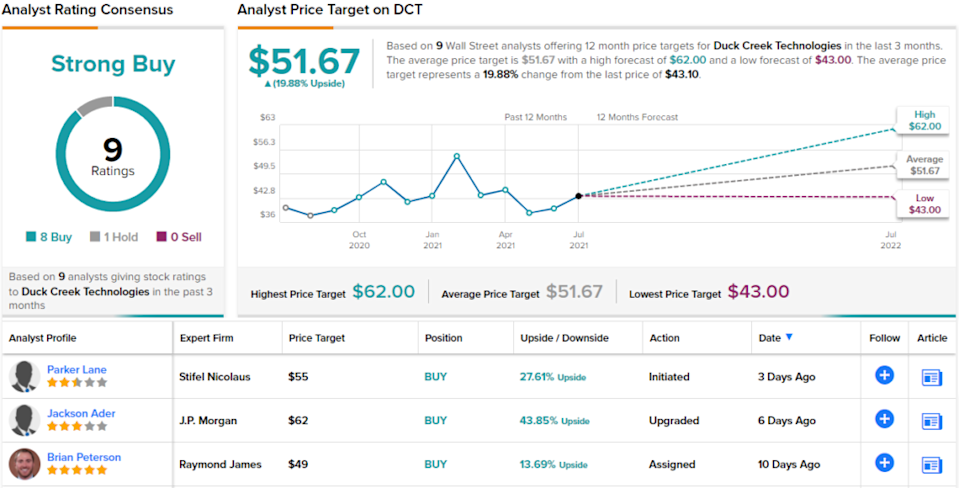 For the next tech stock we’ll look at, we’ll shift over to cybersecurity. Radware, based in Mahwah, New Jersey, is a provider of cybersecurity for data centers, offering application delivery products to secure physical, cloud, and software infrastructure. The company is a global leader in the field, and boasts over 12,500 enterprise and carrier customers globally.

Radware has seen solid financial results. The company’s usual pattern is to post the year’s highest revenues in the 4th quarter of the year, with a dip into Q1, and the most recent quarterly statement, for 1Q21, follows this pattern. The $66.7 million in reported revenue was down 3% sequentially, but was up 11% year-over-year. The company posted an EPS of 8 cents, which was up 33% yoy. The gains were supported by a record level of annual recurring revenue, which gained 10% yoy to reach $176 million. The company reported $435.3 million cash reserves as of the end of Q1.

Recently, Radware has been scoring a series of partnership agreements, with companies in Europe, Asia, and the US. An agreement with Fujitsu will expand traffic capacity with the Spanish healthcare industry; a joint agreement with Involta will expand Radware’s DDoS protection to additional customers within the US; and a deal with Acantho will bring Radware’s cloud-based web application security into Italy. These are just the partnership agreements that Radware has entered in June; the company is actively seeking partners for expansion projects.

That move toward partnerships caught the attention of 5-star analyst Alex Henderson, of Needham. Henderson believes that Radware’s recent partner agreements form the model that the company will follow for further growth, writing, “We have been pleasantly surprised to see Radware run out 9 contract/partnership deployment wins across its Security platform so far this year. Most of these projects look like material Revenue contributors once they ramp, though the exact timing of their contribution to growth is unclear. We think this not only suggests accelerating Revenue growth, but also punctuates the differentiated approach to market penetration through partnerships. This has become a core strength of the Radware model.”

Henderson puts a Buy rating on RDWR shares, upgrading from Neutral on the strength of those new contracts, and his $40 price target indicates an upside of 32% for the year ahead. (To watch Henderson’s track record, click here.)

Overall, Radware has a Strong Buy consensus rating based on 4 reviews, which break down 3 to 1 in favor of Buy over Hold. The $35.33 average price target suggests a 16% upside from the $30.38 trading price. (See Radware’s stock analysis at TipRanks.) 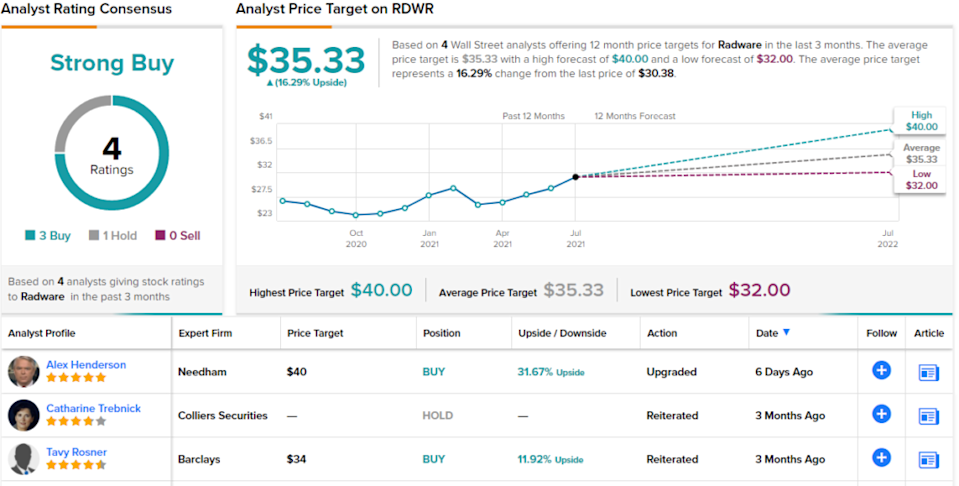