Crypto currencies have been around long enough that we can’t really describe them as ‘the next big thing’ anymore – they’re here and they’re part of the financial landscape.

For stock traders, the rise of crypto brings a unique opportunity – not only in crypto currencies themselves, but in the technology that supports them. The blockchain technology that makes crypto secure, and the digital mining operations that generate new units of crypto currency, require a strong foundation of tech support, electronic infrastructure, and power generation – and crypto mining companies have sprung up to fill that niche.

Compass Point analyst Michael Del Grosso has made a deep dive into the waters of crypto mining operations, to find the hidden treasure in the blockchain space.

“While we believe that blockchain technology is largely decentralized in nature, we note there are several companies supporting its growth…. While Bitcoin tends to drive most of the headlines, we believe investors should move beyond Bitcoin and focus on the transformational technology underpinning the broader crypto and blockchain sector. In our belief, Bitcoin was just the beginning and we believe the emergence of blockchain technology will be one of the most disruptive technological shifts over the next several years,” Grosso wrote.

Del Grosso isn’t just analyzing the blockchain mining industry as a whole, he’s also putting his finger on two stocks that he sees as winners. Looking into their details through the TipRanks database, we find that these are Strong Buy stocks – stocks that have attracted positive attention from Wall Street’s analyst corps. Let's take a closer look.

Through its large-scale computer centers, Marathon is able to control its hash rate – the speed with which it solves blockchain security units, thereby mining bitcoin – and its cost of electricity, by buying in bulk. These are the two largest bottlenecks in the bitcoin mining process.

With a market cap of $2.95 billion, Marathon still counts as a small-cap stock – and on June 15, the company announced that it will be entering the Russell 2000 index effective June 28.

Also in June, Marathon gave its May 2021 bitcoin holding updates. The company reported holding 5,518 bitcoin – up 226 from the prior month – and boosted its hash rate to 1.9 EH/s (exa hashes per second). Marathon’s bitcoin holding is worth over $200 million.

Marathon’s growth took off in 1Q21. The company reported $9.2 million in total quarterly revenue, compared to less than $600K in the year-ago quarter. EPS jumped from an 11-cent per share loss one year ago to an 87-cent per share profit. The gain is attributed to unrealized profits from the increase in value of bitcoin holdings.

Based on all of the above, Del Grosso rates MARA a Buy, and his $40 price target indicates his belief in a 33% one-year upside potential. (To watch Del Grosso’s track record, click here)

“MARA is one of a select few Bitcoin miners with established scale, next-generation hardware, and low-cost power purchase agreements in place. Bitcoin miners are highly correlated with their underlying asset although we believe MARA should continue to outperform given its significant scale. We forecast MARA will be able to sufficiently continue to scale its operations through its recent agreement with Compute North eventually reaching 10.37 EH/s in 2022 – eventually becoming the second-largest miner in North America," Del Grosso opined.

Overall, the Strong Buy analyst consensus here is unanimous, and based on 3 recent analyst reviews. MARA stock is selling for $29.77 and its $45.67 average price target suggests a considerable upside of 53% for the year ahead. (See MARA stock analysis on TipRanks) 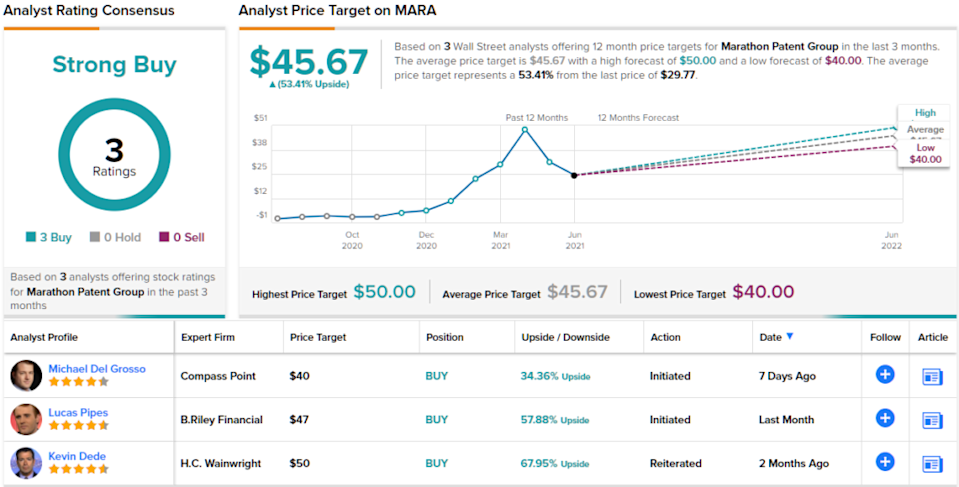 The second crypto stock we’re looking at, Riot Blockchain, takes as its primary stating point the disruptive power of bitcoin in the monetary universe. Riot is a bitcoin mining company, with subsidiary facilities in Rockdale, Texas and Massena, New York. The company’s Texas facility, Whinstone US, is home to the largest single bitcoin mining facility in North America, with 300 megawatts of capacity. Currently, Riot is using some 51 megawatts across all its operations, and boasts a hash rate of 1.6 EH/s.

Riot acquired the Whinstone operations in a transaction that was completed at the end of May. The company paid $80 million in cash for the acquisition, along with a transfer of 11.8 million shares of RIOT stock to Whinstone.

Due to the decelerating nature of bitcoin production, miners have to constantly upgrade and speed up their mining facilities. Riot is in processes of adding miners, and by the end of this month (June 2021), expects to see the hash rate reach 2.51 EH/s while using some 79 megawatts of power.

In the first quarter of 2021, Riot saw its revenue increase by over 800% year-over-year, from $2.4 million in 1Q20 to the $23.2 million for the most recent report. The company’s net income hit a record level, of $7.5 million. This income, which translated to 9 cents per share, compared to the $4.3 million loss reported in the year-ago quarter.

In his comments on RIOT, Del Grosso sees the company’s size and ability to conduct acquisition activity as key factors.

“We believe that Whinstone is transformational for RIOT because it expands its operational footprint and enables the company to benefit from either hosting revenue streams or potentially expand its own mining footprint with the added capacity. Should the company pursue a hosting model, we believe it could generate ~$50M annually based on Northern Data’s previous disclosures and generate ~45% EBITDA margins based on our estimates for hosting economics," Del Grosso wrote.

To this end, Del Grosso rates RIOT a Buy rating along with a $43 price target. This figure implies an upside to the stock of 22% over the next 12 months.

All in all, this is a stock that Wall Street likes. The Strong Buy consensus is based on 3 recent positive reviews, making it unanimous. The shares have an average price target of $42.33, suggesting a ~20% upside from the current share price of $35.30. (See RIOT stock analysis on TipRanks) 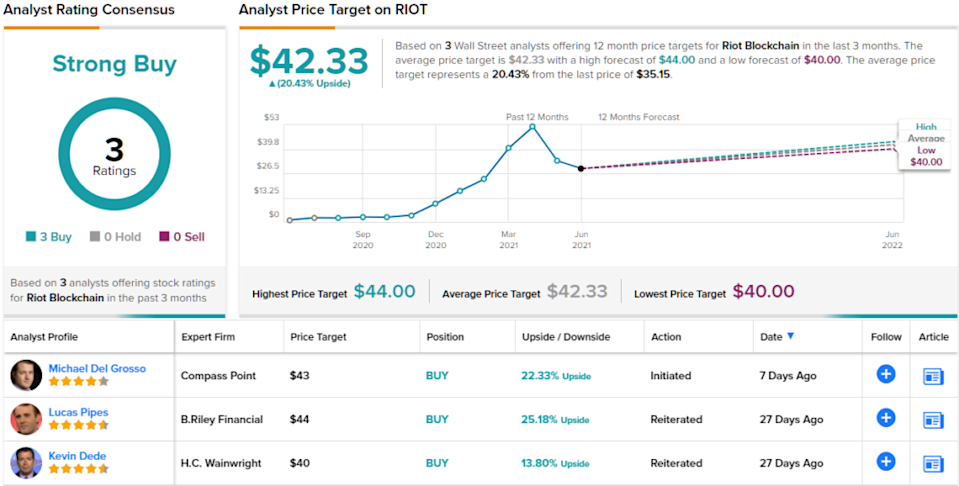