Inflation may be rising, but for now, at least, investors don’t seem to mind. Both the NASDAQ and the S&P 500 are holding just below their all-time high levels, reflecting a wide-spread feeling that, with interest rates low, stocks will provide the strongest returns for the near future.

And stocks have been delivering. The S&P is up 13% year-to-date, and the NASDAQ, despite greater volatility and some weakness in the big tech companies, is up 7%. These gains come even as inflation is starting to surge; as of the end of April, the PCE inflation index was up 3.6% annually, and the Biden Administration’s spending plans are likely to push that up further. The Federal Reserve, for its part, has no plans on raising interest rates yet; the combination of higher inflation and lower interest rate yields has been described as a ‘transitory sweet spot’ for the economy.

For retail investors, this means that now is the time to look at growth stocks. Despite some notable pullbacks, there are also some names out there which have beaten the market’s overall gains in recent months, and show clear signs of more growth ahead. We’ve used the TipRanks platform to look up two such stocks. A look at their details, along with commentary from the Wall Street analysts, should tell why they are such compelling buys.

We’ll start in the energy industry. Northern Oil and Gas is a hydrocarbon exploration company, focused on the Williston Basin of North Dakota and Montana, with smaller operations in New Mexico and Pennsylvania. If the northern tier states sound familiar to you, it’s the region that, in the early 2000s, put US oil and gas production on the map and started the fracking production boom. Northern has over 7,000 producing wells on more than 247,000 acres of owned land. The company has 205 million barrels of oil equivalent in proven reserves on its properties, with production split 55%/45% between hydrocarbon liquids and gas.

Like many labor-intensive industries, energy extraction saw steep losses at the start of the covid crisis last year, and Northern was no exception. Since the third quarter of 2020, however, the losses have been moderating. The 1Q21 earnings report showed the lowest EPS loss in the past four quarters, of $1.66 per share. Total oil and gas sales in the quarter reached $157.3 million, and production was up 7.5% from the previous quarter.

Northern felt confident in its financial position, enough to declare its first dividend. The payment, of 3 cents per common share, will go out in July to shareholders of record as of June 30. At the declared rate, the dividend has a modest yield of 0.66%. The key point here is not the size of the dividend, but rather that management felt secure enough to begin the payments.

Investors are also confident in Northern Oil and Gas. The company’s stock is up 126% in the past 12 months. Those gains have been concentrated in the last few months; NOG shares are up 115% year-to-date.

Covering this stock for Truist, analyst Neal Dingmann writes, “Northern has made tremendous financial progress and now the company can start benefitting from the fruits of its labor, in our view. NOG will have multiple options for various incremental shareholder returns as we forecast the company generates nearly $150mm in FCF this year and likely notably more next year if prices at least hold given the minimal hedges next year. We believe the company will continue to benefit from its organic and external strategies of past quarters.”

In line with his comments, Dingmann rates the shares as a Buy, and his price target of $25 implies an upside of 33% for the coming year. (To watch Dingmann’s track record, click here.)

This company’s firm position in some of the country’s most productive oil and gas regions has led Wall Street to a unanimous conclusion: NOG shares are a Strong Buy, based on 4 recent positive reviews. The stock is selling for $18.86, and the $20.50 average price target indicates a 9% one-year upside potential. (See Northern’s stock analysis at TipRanks.) 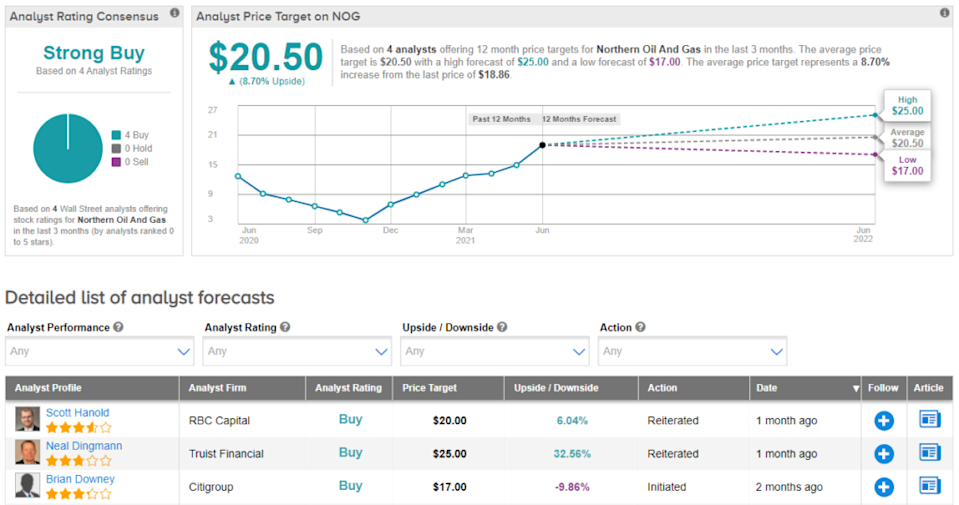 Next, we’ll shift from the energy sector into finance. Meta Financial is a savings and loan holding company, with operations run through its subsidiary, MetaBank. The company offers retail banking, electronic payment processing, and insurance premium financing among its services.

In its recent financial report for fiscal Q2 of 2021, which is normally the company’s strongest quarter of the year, Meta Financial reported revenues of $187.3 million, missing Wall Street’s estimates by $4.48 million. EPS rose strongly, however. The reported earnings per share of $1.84 was up 26% from 2Q20, and an even more impressive 119% from 1Q21. It also came in $0.27 higher than the Street’s forecast.

The company reported its gross loan and lease accounts at $3.65 billion, up 6% since the end of the last calendar year. Average deposits in the second fiscal quarter were up 181% yoy, to $9.29 billion. During the 2021 tax season, MetaBank originated $1.79 billion in loans toward refund advances, up 34% year-over-year.

At the same time, Meta Financial’s stock price has been displaying some serious growth. The shares have gained 46% year-to-date and are up 165% in the last 12 months.

William Wallace, 5-star analyst with Raymond James, is impressed by Meta Financial following the F2Q21 results, writing, “All in, peeling back the layers, it was another strong quarter for Meta on multiple business fronts, where its diversified model continues to serve it well. Ultimately, with shares trading at a rather steep discount on a P/E basis, we continue to believe the risk/reward dynamic skews very attractively, where the strength of its national fee-based businesses, now more proven from a credit perspective, should continue to drive above-peer profitability.”

Wallace rates the stock as a Strong Buy, and his $63 price target implies a 12-month upside potential of 18%. (To watch Wallace’s track record, click here.)

There are 3 recent reviews on CASH shares, and all are positive; once again, we’re looking at a stock whose Strong Buy consensus rating is unanimous. Meta Financial has a share price of $53.23 and the average price target of $59.33 suggests an 11% upside from that level. (See Meta Financial’s stock analysis at TipRanks.) 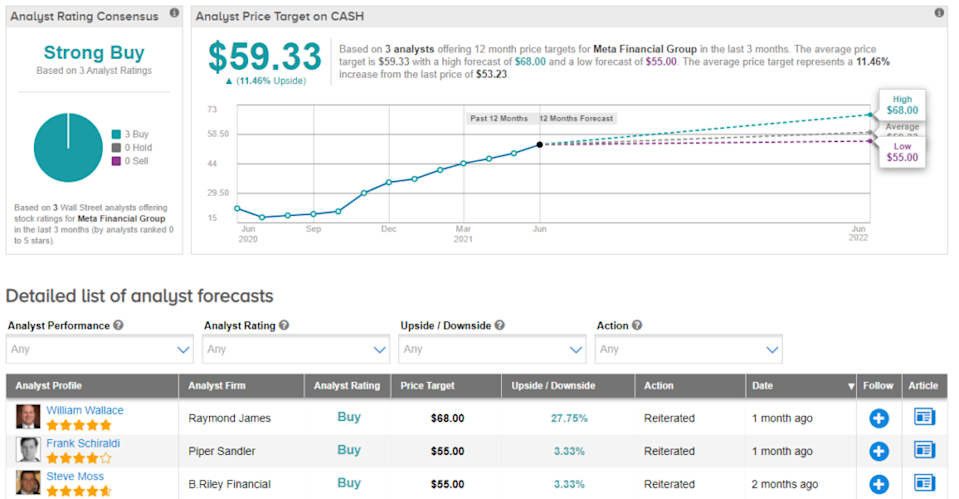