Of all the controversial plays on Wall Street, penny stocks take the cake. The risk-tolerant flock to these names as the potential for share prices to grow from pocket change to more than a few dollars is too tempting to ignore.

That said, these tickers aren’t without their pitfalls. Some investors avoid them entirely, arguing that the bargain price tags are too good to be true. Rather, the fact that shares are trading at such low levels could reflect problems lying beneath the surface, whether it be poor fundamentals or overpowering headwinds.

So, how are investors supposed to distinguish between the long-term winners and those set to come up short? One strategy is to follow the analysts’ advice.

We'll start with Synchronoss, a small-cap e-commerce company whose main products – software and cloud networked synchronization platforms – allow online vendors to connect and sync their communications, activations, backups, and customer contacts across service providers and devices. The system allows for greater coordination, lower costs, and streamlined networking. According to Synchronoss, the company’s vendor customers can find new revenue, improve their own site visitor engagement, and improve the overall buyer experience, all leading toward more business.

The company reported signing two important new contracts in Southeast Asia during the first quarter, including one with the Indonesian data center company Telkomsigma. This contract will deliver Synchronoss’ product to 25 universities, for use by profs, students, and school groups. Synchronoss also renewed its messaging contract with Telecom Italia Mobile, and added security functions to the services.

Synchronoss also continues its major partnership with AT&T. The telecom giant uses Synchronoss products to power its Personal Cloud, and arrangement that has worked well for both companies.

In its recent financial report for Q1, the company posted revenues of $65.5 million, slightly above consensus estimates of $63.5 million. Adjusted EBITDA of $5.5 million well exceeded analyst predictions of $2.5 million, and was driven primarily by recurring revenue sources. As a result, the company raised its EBITDA guidance for FY21 to between $32 million and $37 million (from $30-$35 million).

As each share is currently going for $2.44, Synchronoss' price tag could present investors with an attractive entry point, according to Canaccord 5-star analyst Michael Walkley.

"We view the valuation as a compelling opportunity as management executes on its turnaround plans, implements additional cost savings, announces new customer wins, and increases its recurring revenue mix. In the event management continues to execute and margins expand consistent with our 2021/2022 estimates, we believe the multiple could expand closer to peer multiples at ~3x EV/revenue. Even if the multiple expands to 2x EV/ revenue on our 2022 estimate and reaches our $8 price target, this would generate meaningful upside to the current share price… With several Cloud deals anticipated to contribute to growth in 2021 and beyond, sustained growth potential at Verizon, which renewed its White-Label Personal Cloud Platform for 5 years, and strong annual RCS revenue contributions anticipated from US carriers and Japanese deals, we believe there are several strong building blocks to support our estimates," Walkley opined.

In line with his upbeat outlook, Walkley rates SNCR a Buy, and his $8 price target implies a robust upside of 230% on the one-year time frame. (To watch Walkley’s track record, click here)

Walkley is not the only analyst bullish on this stock; Synchronoss’ consensus rating is a unanimous Strong Buy, based on 4 recent positive reviews. At $7.73, the average price target suggests gains of ~219% on the 12-month horizon. (See SNCR stock analysis on TipRanks) 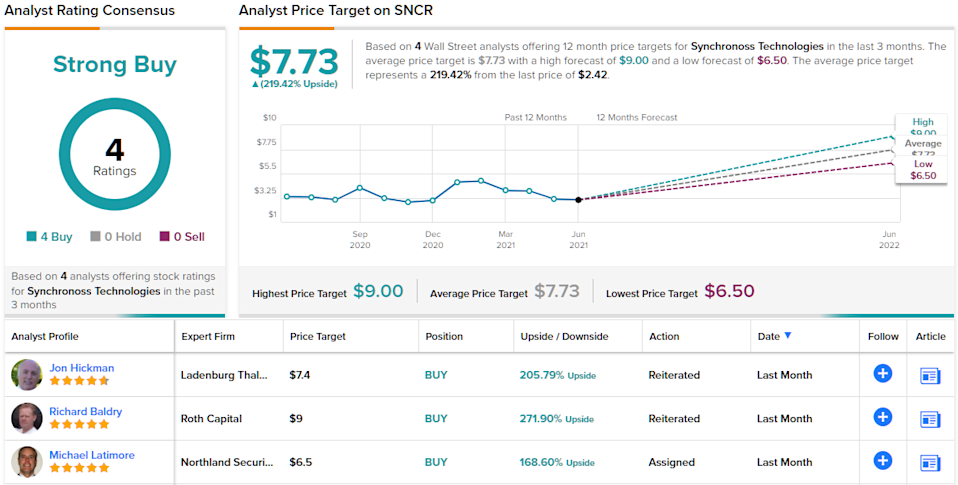 Next up, ContraFect, is a clinical stage biotech firm working on new anti-infective medications and technologies. Drug-resistant infection is a major issue for hospital and healthcare workers, bordering on crisis proportions. In the US alone, resistant infection causes 2 million illnesses annually, and globally is responsible for over 700,000 deaths. By 2050, resistant infections may cost the healthcare economy upwards of $100 trillion accumulated damages.

ContraFect works to counter this. The company is working to develop direct lytic agents (DLAs), including lysins and amurin peptides, to aid inn the treatment of lethal, resistant infections agents. Two of the main targets of ContraFect’s pipeline are methicillin-resistant Staph aureus (MRSA) and Gram-negative pathogens like multi-drug resistant (MDR) Pseudomonas aeruginosa.

The company’s leading product, drug candidate exebacase, is a recombinantly-produced lysin targeting Staph aureus, a potentially lethal bacteria. In early testing, exebacase has shown potent anti-bacterial activity, killing the targeted bacterial cells. Exebacase is now undergoing the Phase 3 DISRUPT study, a clinical trial with patients enrolled in a 2:1 ratio of exebacase versus placebo. Interim data is expected in 2H21. On a positive note, the US government’s Biomedical Advanced Research and Development Authority, or BARDA, has awarded a contract to ContraFect for development of exebacase, worth up to $86.8 million.

Targeting P. aeruginosa, the company’s second leading drug candidate, CF-370, has also shown potent activity in early-stage testing. So far, the promising data has come from animal models, but further studies, including human trials, are planned. Funding is supported by the Combating Antibiotic Resistant Bacteria Biopharmaceutical Accelerator (CARB-X), which awarded a grant to ContraFect for this program, to the amount of $18.9 million.

Among the bulls is Mizuho analyst Vamil Divan who takes a bullish stance on CFRX shares.

"We remain bullish on CFRX shares ahead of Phase 3 data from the DISRUPT trial for exebacase. We maintain our 70% probability of success for DISRUPT at the final analysis given the strength of the Phase 2 exebacase data. As a reminder, in Phase 2 patients with methicillin-resistant Staph aureus bacteremia, including patients with rightsided endocarditis, showed an 82.6% response rate on exebacase + standard of care vs. a 33.3% response rate for patients on standard of care alone. We assume positive Phase 3 data in mid-2022 and a commercial launch in 2023," Divan wrote.

Overall, Divan likes what he sees here, as evidenced by his Buy rating on the stock. His $10 price target suggests it has a ~156% upside for the next 12 months. (To watch Divan’s track record, click here.)

What does the rest of the Street have to say? 3 recent Buys add up to a Strong Buy consensus rating. Given the $10.17 average price target, shares could climb 160% in the year ahead. (See CFRX stock analysis on TipRanks) 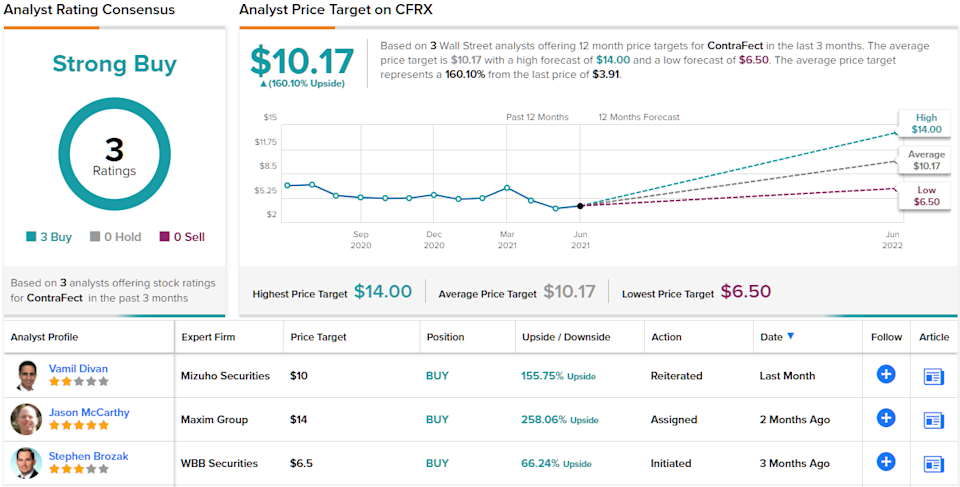