Say ‘green economy,’ and what is the first thing you think of? Renewable fuels, electric cars, solar power farms, wind turbines, hydrogen fuel cells, recycling plants – these are all components of the green economy. The economic sector is currently small, compared to the US’ near-$20 trillion annual economic output, but it’s politically potent and gaining in importance year by year. And as they expand, green industries bring more and more opportunities to investors.

Those opportunities, however, are not always clear. Green tech companies operate in new niches, or bring new twists to old niches, making them difficult, at times, for retail investors to evaluate. But for investors willing to put in the legwork, there are plenty of green companies out there, in the small- to mid-cap range, to choose from.

We’ve used the TipRanks platform to look up the recent stats on two companies that are part of the renewable energy sector. They approach the general problem – generating clean energy from renewable sources – from very different direction, but beyond that, they fit a profile. They are Buy-rated stocks, with considerable upside potential. Let's take a closer look.

The first stock we’re looking at, TPI Composites, develops and manufactures lightweight, high-strength composite materials – materials which are used in wind turbines. TPI is a global leader in the production of composite wind turbine blades, holding a 32% global market share, excluding China. The company saw $1.7 billion in net sales in 2020, for a company record.

With global electricity demand expected to expand by 60% over the next 30 years, and wind power making up an increasing share of that expansion, TPI’s opportunity is clear.

A look at the company’s 1Q21 numbers will show that it is already grabbing that opportunity. TPIC reported $404 million in total sales for the quarter, up from $356 in the prior Q1, or 13.5%. Several key performance indicators all rose during the quarter – the total number of blade sets produced rose yoy, from 731 to 814; the estimated megawattage of generated energy from those blade sets increase yoy from 2,329 to 3,072; and the utilization rate, a comparison of the blades invoiced to the blades produced, rose from 70% to 77%, an indication that the turbine blades are going to active wind power farms.

On the negative side of the ledger, the company’s net loss deepened from 1 cent per share a year ago to 5 cents in the recent Q1. At the same time, Q1’s administrative costs fell, dropping from $9.5 million to $8.9 million.

Weighing in from Evercore ISI, analyst James West is heavily impressed by this company’s manufacturing performance, especially given the pandemic crisis.

“Impressively all of TPIC’s global wind manufacturing facilities are operating normally. We had been concerned spikes in new COVID-19 cases could disrupt activity at the new India plant, but the impact has been immaterial to operations or the supply chain in India or Turkey where cases also increased in recent months. Production is also normal in China where TPIC is working to backfill five lines taken out of production late last year,” West wrote.

Overall, TPIC has a Strong Buy consensus rating, based on 6 reviews that include 5 Buys and just 1 Hold. The shares are priced at $45.99 and their $61.67 average price target suggests room for 34% upside in the next 12 months. (See TPIC stock analysis on TipRanks) 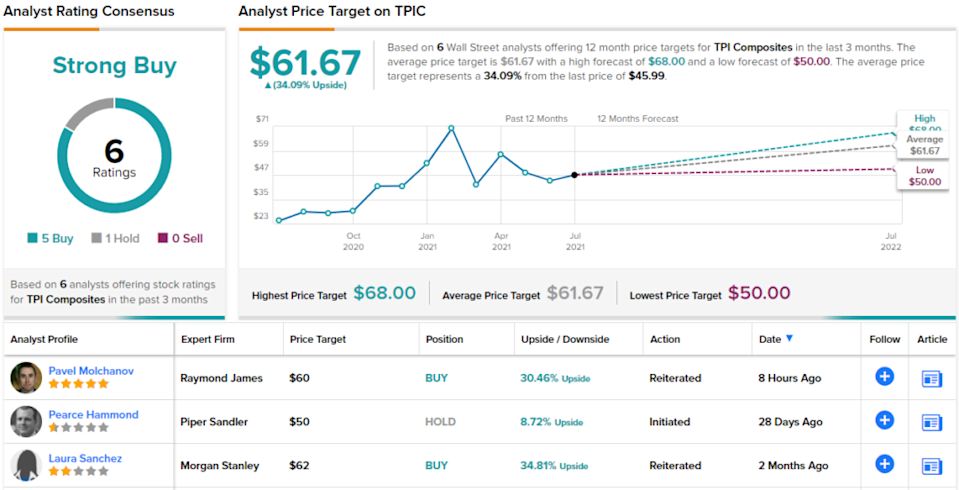 For the next stock, we’ll turn to American Superconductor, a company that works to integrate the green power generation sector into existing electric grids. Green electricity, primarily generated by wind or solar facilities, can be highly variable in total output and voltage; AMSC develops control systems that can be stalled at the power substations or even on individual wind turbines, and which then support the connections between power generation sources and the grid.

Connecting green power to the grid is only part of this company’s work, however. American Superconductor has an active marine division, developing efficiency improvements, including degaussing devices, for marine-use electric motors. The company also has a wind tech division, involved in wind power generation, designing onshore and offshore wind turbines.

In the first half of this year, American Superconductor has been expanding its business. In January, AMSC contracted with the US Navy to deploy a high temperature conductor (HTS)-based ship protection system on the next San Antonio class amphibious transport. This will be the fourth such system AMSC has installed on a San Antonio ship. More recently, in June, AMSC announced more than $19 million in new orders for energy power systems, in the US and abroad.

Also in June, AMSC released its financial results for Q4 of fiscal 2020. The top line revenue came in at $21.2 million, up 16% from the $18.1 million reported in the year-ago quarter. While revenue was up, the EPS loss deepened slightly yoy, from 27 cents to 29 cents. In two key metrics, the company reported strong growth – the grid business, the company’s core, grew 40% in fiscal year 2020, the sixth year in a row of growth, while AMSC finished fiscal Q4 with over $80 million in cash on hand, up 21% yoy.

Oppenheimer’s analyst Colin Rusch, rated 5 stars and holding the #6 place overall in TipRanks’ ratings, is impressed by AMSC and writes: “We are encouraged by the company's potential to reach positive cash flow from multiple routes, including growth in Gridtec, incremental Navy orders, and a recovery in the Wind business…. We remain bullish as we believe power quality and management will prove crucial for the emerging net-zero economy…"

The analyst added, “We believe AMSC has built a portfolio of value-added IP and is positioned to benefit in both its Windtec and Gridtec businesses from long-term secular trends, including aging utility infrastructure and the proliferation of intermittent renewable energy generation.”

In line with these comments, Rusch gives the stock an Outperform (i.e. Buy) rating, with a $28 price target to imply a 74% one-year upside potential. (To watch Rusch’s track record, click here)

Some stocks fly under the radar, and AMSC is one of those. Rusch's is the only recent analyst review of this company, and it is decidedly positive. (See AMSC stock analysis on TipRanks) 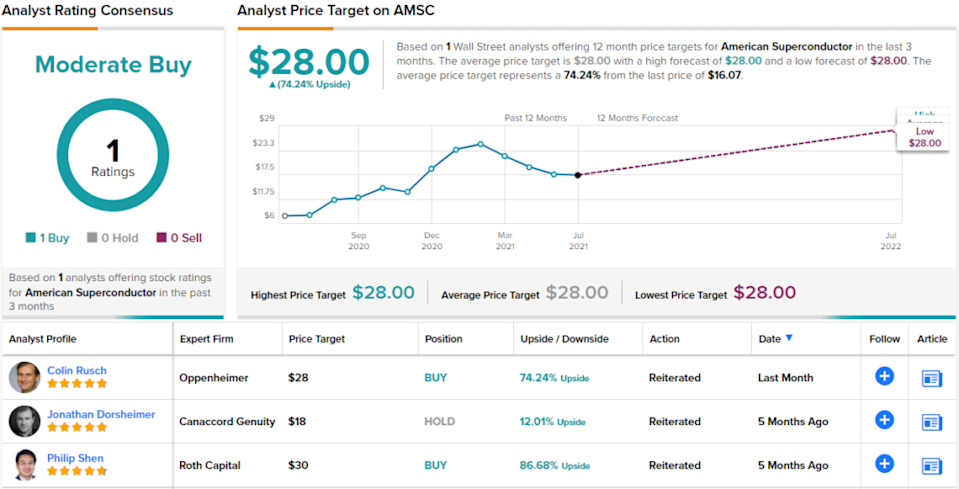